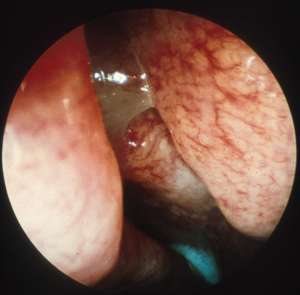 Polyps look like small grapes and will appear either on their own or in clusters in the nasal cavity. Symptoms of nasal polyps can be a blocked nose, runny nose, sneezing, poor sense of smell and taste and catarrh.
Swelling of the lining of the nose usually due to inflammation, is known as a nasal polyp. Nasal polyps usually come from the ethmoid sinuses, which drain into the side wall of the nasal cavity. Inflammatory fluid is contained in nasal polyps, often as a result of allergy and infection although, some people suffer from them for no obvious known reason.
Nasal polyps are common in late onset asthma, intolerance to aspirin and cystic fibrosis. 20-40% of patients with nasal polyps have coexisting asthma. Nasal polyps are more common in men. One-sided nasal polyps are rare and should be investigated further in both adults and children.
Steroid drops cause nasal polyps to shrink in around 80% of people and nasal steroid sprays can be used for many years as a way of controlling symptoms as so little is absorbed into the body. Nasal polyps can be removed surgically and will often provide relief in helping a patient to breathe more easily however, polyps often return over a period of 3-4 years. Sinus surgery may be an option if nasal polyps repeatedly come back.

We have four pairs of sinuses in our heads, which aid in controlling temperature and humidity of the air which reaches our lungs. In newborn babies, sinuses are pouches about the size of peas and extend outward from the inside of the nose to the bones of the surrounding face and skull. As we grow, sinuses eventually become cavities which have the same type of lining as our nose, these cavities are connected by smaller openings called ostia. 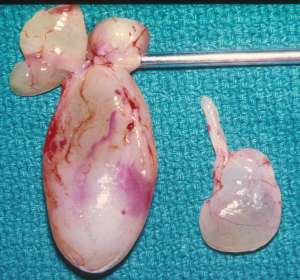 Normal functioning sinuses will produce around a pint and a half of mucus each day! This mucus passes back through the nose and will collect dust particles, bacteria and any other pollutants along the way. Tiny hair type structures known as cilia, sweeps the mucus into the back of the throat to be swallowed. This is a normal bodily function which is not noticed by most people.
Pain from sinusitis is normally caused by blockage of the sinus openings which could be as a result of infection, irritants, allergy or even structural abnormality. Sinusitis type pain does however, have other causes such as tension headache, migraine, neuralgia and jaw dysfunction.
It is normal for an adult to have a cold and/or a respiratory tract infection up to three times in a year, this is more frequent in children. Sometimes a common cold is followed by bacterial infection and is usually evident when normal mucus produced turns from clear to yellow or green. Infections cause swelling of the tissues inside the nose and mucus to thicken, sinus drainage may slow down or even stop which can result in sinus infection.
Irritants in the environment such as pollution, smoke, chemicals, sprays, household detergents, can also cause swelling and/or blockage of the tissues in the nose, obstructing proper drainage of the sinuses which again, can result in sinusitis.
Allergic reactions often cause nasal stuffiness, runny nose, sneezing and itchy/watery eyes along with inflammation of the nasal tissues. Chronic sinusitis is sometimes linked with asthma and in patients where asthma is caused by allergy, it can make the asthma more difficult to control.
Sometimes structural abnormalities can cause narrowing of the nasal cavity, sometimes the narrowing is severe and results in a mucus build up behind the blockages, causing sinus infections.
Antibiotics are usually used to treat acute sinusitis along with medication (decongestants) to help to reduce the swelling of the nasal tissues. Long term treatment is sometimes needed for chronic sinusitis and may include a nasal steroid spray. For patients with an underlying allergy, antihistamines should be taken. Surgery is normally only considered if other medical treatment fails. There are a number of surgical options which will depend on the severity of the sinus disease, most can be performed without any external incision.

Head and neck cancer is used to describe malignant tumours which may occur in the mouth (oral cavity), throat (pharynx), voice box (larynx), the salivary glands, the nose and the sinuses.
Usually, lumps/tumours in the head and neck area are benign (non-cancerous) and can arise for a number of reasons. Occasionally, a lump or a tumour may turn out to be malignant (cancerous). It is extremely important that an early diagnosis is sought for prompt treatment to be successful.  Cancerous lumps tend to be painless and enlarge progressively.
During consultation with an ENT surgeon, thorough examination of the patient will be carried out which often involves the use of a flexible ‘telescope’ which allows examination of the nose/throat under a local anesthetic.
The following symptoms may (or may not) be present with malignant lumps or growths and it is worth noting that many of these symptoms are also associated with other, less serious problems – they are NOT only seen as symptoms of malignant lumps/tumours:

– Difficulty swallowing (Dysphagia), pain in the throat that is persistent.
– Ulcers/swellings in the mouth.
– Hoarseness or persistent change in the voice which lasts for several weeks and is not accompanies with an infection such as laryngitis or flu.
– Bleeding in the mouth or throat.
– Persistent earache, especially when swallowing.
– White and/or red lesions in the mouth, lasting for several weeks.
– Changes to an existing or a new, black or blue spot on the face.